Ball pythons have been one of the most popular species with reptile keepers for almost as long as people have been keeping snakes as pets.

This shouldn’t be surprising, as their gentle nature, manageable size and attractive color patterns were just as appealing to snake enthusiasts in years past as they are to their modern counterparts.

But unfortunately, for a long period of time, the vast majority of those available in the pet trade were all wild-caught individuals.

Wild-caught snakes of any species are generally less desirable than captive-bred individuals, but wild-caught ball pythons are often especially problematic because they are often very difficult to tempt into eating domestic rodents.

Fortunately, this all changed in the 1990s, when breeders started developing successful captive breeding programs.

Now, most snake enthusiasts will find it easy to acquire captive bred animals, and they’ll never have to experience the frustration wild-caught individuals can cause via their finicky eating habits.

You can even breed ball pythons yourself.

Many keepers – including relatively inexperienced ones – find that breeding ball pythons is a rewarding experience that gives them an additional way to enjoy their pets.

We’ll explain the basics of the process below so that you can launch your own breeding project and bring a few new baby ball pythons into the world.

We’ll begin by explaining the basics of the ball python breeding process so that novice keepers can learn what to expect.

Just note that none of the steps or recommendations provided should be considered “written in stone.”

Ball python breeders all embrace slightly different “recipes” for success, and what works for one breeder may not work for another.

Nevertheless, most successful ball python breeders employ some version of the following:

How To Sex Ball Pythons

As mentioned, the first thing you must do to breed ball pythons is to acquire a mixed-sex pair – you need at least one male and one female.

You’ll likely find that most people selling ball pythons will indicate the sex of the animals being offered, but it is wise to verify their sex yourself. Mistakes are common, and most experienced breeders have at least one story involving a snake that was improperly sexed by the seller.

However, sexing ball pythons is a delicate procedure that is best learned under the guidance of an experienced keeper or vet.

In fact, you can always simply defer to your vet and allow him or her to determine the sex of your snakes.

The procedure is known as “probing” and involves passing a blunt metal shaft into the vent of the snake.

To probe your snakes, you’ll need an assistant, a set of stainless-steel snake probes and a water-based lubricant.

You’ll need to select a probe size that is suitable for the individual snake you intend to probe, which can take some practice and experience to grasp.

If you aren’t comfortable doing so, consult your vet or an experienced keeper.

It is often helpful to check both sides of the snake’s tail. If you obtain wildly different results (two scales on one side and seven on the other), you may want to recheck to confirm.

There are a few other ways to sex snakes, such as “popping,” or attempting to manually evert a snake’s hemipenes, if present.

However, this technique is only effective with very young animals and requires great care on the part of the keeper to avoid injuring the animal. Accordingly, it will not be discussed further here.

Additionally, male ball pythons typically have larger spurs than their female counterparts, but this is not a reliable criterion, as many snakes present exceptions to this trend.

Preparing Your Ball Pythons for Breeding

Preparing your ball pythons for breeding trials essentially requires you to ensure that your animals are large enough to breed and in the best possible health.

Typically, males will be ready to breed during their second winter, once they achieve body weights of about 600 grams or so (although some will breed sooner than this).

Females are rarely ready until their third winter, after achieving body weights of about 1500 grams.

The animals should have good body weight and muscle tone, but they should not be allowed to become obese. This will often prevent them from breeding successfully. Feed them regularly, but do not “power feed” them.

It is also a good idea to have your animals examined by your vet before you begin the cycling portion of the process.

The lower temperatures involved with cycling will make it harder for the animals to fight off illness, so you’ll want to ensure your animals are completely healthy before proceeding.

Once you note ovulation, you’ll want to provide the female with an egg deposition chamber.

Different keepers utilize different types of containers, but plastic storage boxes are likely the most popular. Just make sure that it is large enough to accommodate your snake comfortably.

You can add some newspaper, vermiculite or cypress mulch to the egg deposition box, but some breeders keep the container completely empty.

Try not to disturb your female ball python unnecessarily during this time – especially once she enters the egg deposition box.

However, you will need to monitor her so that you can note when she deposits the eggs; because ball pythons typically wrap their body around the egg mass, eggs can occasionally go unnoticed.

Once your female deposits eggs, you’ll need to do one of two things:

You can make an incubator yourself, but beginners are generally better off by purchasing one. 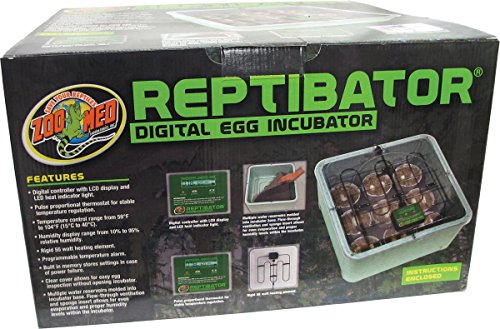 You can use just about any suitably sized plastic storage container for egg boxes, just be sure to drill one or two small holes in the lid for air exchange.

Fill the egg boxes about half-way with barely dampened vermiculite – you want it to be damp enough to clump when squeezed, yet not so damp that water trickles out when you do.

Set your incubator up several weeks before you’ll need it so that you can dial in the temperatures and ensure that the incubator is holding them consistently.

Most breeders incubate ball python eggs at 89 to 90 degrees Fahrenheit.

Of course, to begin the incubation process, you’ll need to remove the eggs from the female’s coils.

The best way to do so is to quickly and gently place your hands around the snake’s body to immobilize her, and then try to grip her body gently and begin unwrapping her from the mass.

The tricky part is keeping the egg mass from moving during the process, which is part of the reason it is always easier to do so with a partner to help.

Once you’ve removed the female, you’ll want to mark the uppermost portion of each egg with a graphite pencil. This will help ensure that the eggs remain in the same orientation in which they were deposited.

This is important, as turning or rotating the eggs may cause the developing embryos to drown.

Transfer the eggs to the egg boxes.

Some keepers try to separate eggs that are adhered together, while others simply keep the egg mass as-is. Either method will work, but beginners are probably better off leaving the clutch intact.

Once you place them in the egg box, place the box in the incubator and start watching the calendar. Most of the eggs should hatch in about 50 to 60 days.

If everything goes well, you’ll start seeing young ball pythons emerge from their eggs about two months after the eggs were deposited.

Some of the snakes will hatch and leave their eggs more quickly than others. Don’t let this concern you and avoid the temptation to remove the snakes manually.

Simply allow them to enter the world on their timeline and remain patient.

As each snake completely leaves its egg, you’ll want to remove it from the egg box and transfer it to an individual enclosure.

Keep things simple for the first few weeks; just use a paper towel for a substrate, include a shallow water dish, and provide the snake with some type of hiding opportunity.

Keep the enclosure temperatures in the low-80s and keep the humidity level a little higher than you normally would for a ball python (hatchlings dehydrate quickly).

You can start feeding trials a day or so after the young hatch, but most breeders wait until after the snakes shed for the first time.

After each snake has eaten its first meal, you can begin caring for it as you would any other young ball python.

Breeding ball pythons is a relatively straightforward pursuit, but that doesn’t mean you’ll have success in your first attempt. Just try to learn from your mistakes and – if you fail the first time – try again the next year.

By learning all you can about your snakes and making changes to correct past mistakes, you’ll likely achieve success at some point.

Questions or concerns? Contact us at info@reptileadvisor.com and we will get back to you ASAP!