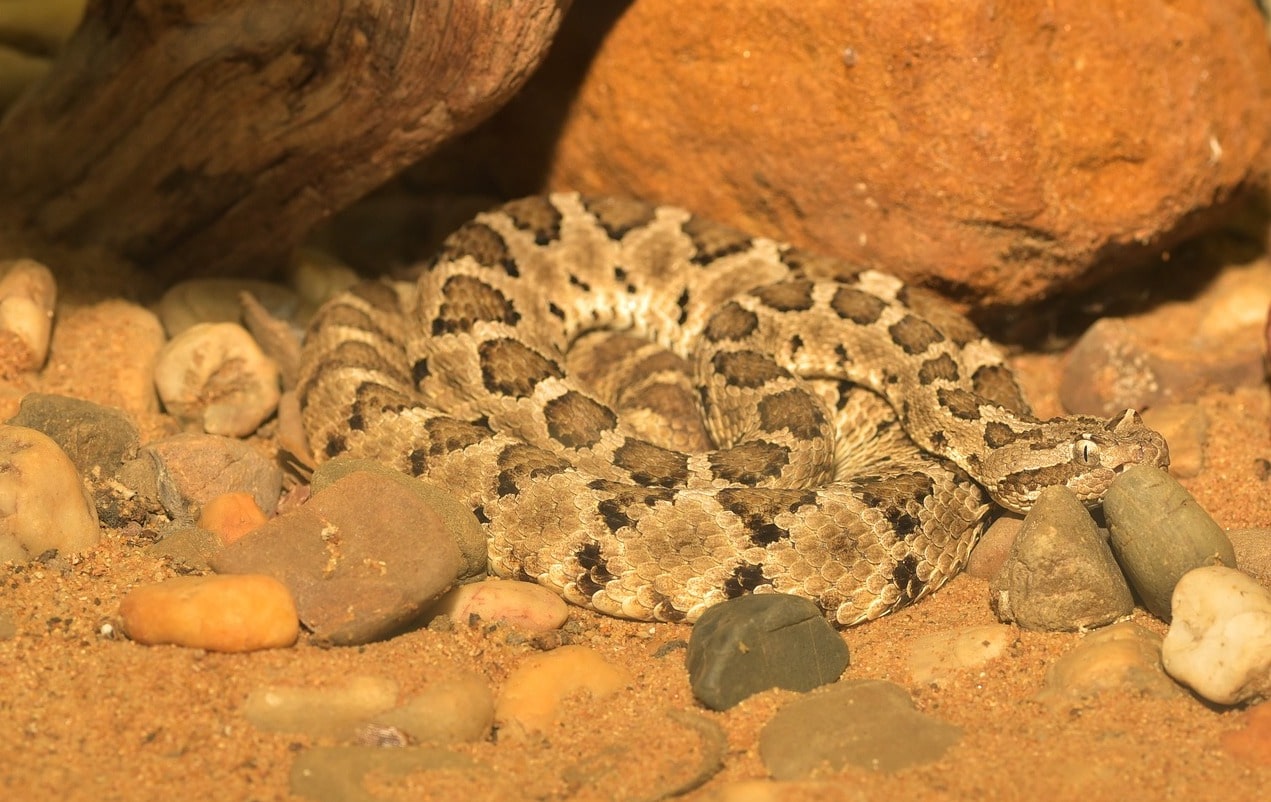 Do rattlesnakes nurse their young?

The answer is NO. Rattlesnakes do not nurse their young. Snakes are reptiles, and reptiles do not lactate.

Lactation, or producing milk for young animals to feed, is a uniquely mammal trait. Snakes are not mammals!

Read on for more details about baby rattlesnakes and feeding practices.

Why Can’t Rattlesnakes Nurse Their Young?

This is a common misconception, and it is unclear where this idea arose from.

Mammals nurse their young using the mammary glands that females are born with. These glands produce milk for young animals to nurse, for days, weeks, or months after the animals are born.

This prevents them from needing the ability to hunt or feed on their own, which most animals will not develop until they are older.

However, snakes are reptiles, and no reptiles have mammary glands! They are not born with the ability to lactate and produce milk, so they (and all other non-mammal animals) must provide food for their young another way. But how?

Here is some additional info on young rattlesnakes:

How Are Baby Rattlesnakes Born?

Rattlesnakes, like some other snakes, go through a birthing process known as ovoviviparity. Rattlesnake mothers form the babies inside their bodies and keep them there as embryos in “sacks”, like eggs without hard shells. Within the egg sacks, the babies have all of the nutrients they need to grow and develop until they are mature and ready to be born. They incubate within their mother’s bodies until they are born, and then once they are born live they break open the thin membrane of the sack.

Are Baby Rattlesnakes Born with Rattles?

Baby rattlesnakes shed their first skins around one week after birth. With the first shed, a small segment of skin (called a button) is added to the base of their tail, and with each shed this segment is added to, creating a rattle! With each shed, the snake (and the rattle) continue to grow, and even after the snake reaches adulthood, it will continue to grow in length until it dies.

It is not possible to tell how old a rattlesnake is by counting its rattles, because every time the snake sheds a new segment is added, and they can shed between 1-4 times per year, so this is not an exact record of age.

Baby rattlesnakes cannot rattle to warn others of their presence, because if they only have one or two segments, there is not enough to rattle and produce any sound! This means that you may not be warned of a baby rattlesnake’s presence like you would an adult.

How Do Baby Rattlesnakes Eat?

While still inside their mother, baby rattlesnakes survive solely on the “yolk” of their egg sacks. These nutrients are enough to sustain them for a short time after they are born. Once the babies are born, they are already mature, and after their first shed they are already able to hunt and eat on their own!

Once they are old enough to hunt, they eat the same prey as their adult counterparts: mice, rats, small rodents, and birds. Rattlesnakes are carnivores and once they have had their first shed, they are able to prey on animals by striking and unleashing their venom, and then swallowing the prey whole. They are able to digest bone, muscle, and fur using their strong stomach acid.

How Do Rattlesnakes Take Care of their Babies?

Mother rattlesnakes have several babies per clutch, usually 8-10 at once. They are usually 10 inches long when they are born, and are already able to do most of the things that adult rattlesnakes can, besides hunt.

Reptile mothers are generally very protective of their young, and take very good care of them. When the babies emerge from their egg sacks, the mother snake will protect and guard them, keeping them warm and out of danger. The first week of their life is spent in close proximity with the mother and their siblings, and after this first week the snakes will shed for the first time. At this point they are old enough to go hunting alone.

During this first week, mother rattlesnakes will allow their babies to leave the den and explore, but will tap or nudge them if they stray too far.

Rattlesnakes come out of brunation (similar to hibernation) in late spring to early summer. Depending on the species of rattlesnake and their geographic location, they will either mate when they first emerge in early summer, or at the end of the summer before entering into brunation again.

Rattlesnakes are generally isolated individuals, with the males only interacting with females during mating. Females will give birth, watch over the babies for one to two weeks, and then leave. For the most part, rattlesnakes live and hunt alone.

Where do Rattlesnakes Live?

There are 32 species of rattlesnakes that specifically live in the Americas, and are concentrated in the American Southwest and Mexico. They can be found in environments as varied as marshes, mountains, prairies, deserts, and forests.

Snakes aren’t able to dig in the way that mammals can, or create their own burrows, so they typically reuse holes from rodents to make their dens. They seek out dens that are in direct sunlight and are preferably sheltered by rocks or wood for protection.

Rattlesnakes brunate in the winter, meaning they enter a less active state in order to conserve energy while they survive through the cold winter months. Because snakes are cold blooded, they cannot stand winter temperatures as well as mammals. For this reason, they stay in their dens with other rattlesnakes and their young to stay safe and secure through the long winter.

Why do Rattlesnakes have Unique Patterning?

Rattlesnakes have patterns that make them blend in with their surroundings. They have dark and light scales that imitate the appearance of the shadows and light spots of their natural environment. At birth, baby rattlesnakes have these patterns already, and these patterns grow with their bodies and persist through life. The patterning of rattlesnake skin is unique and helps other snakes of the same species identify mates and family members.

As babies, they do not have as much venom as adult rattlesnakes, and they are very vulnerable to predators. By having their patterning from a very young age, they are protected from rodents, other snakes, and other predators that might prey on a young snake. By simply curling into a ball or stretching out in the shadows, their unique patterning helps them blend in with rocks and sticks, avoiding predation.

Rattlesnake venom is produced within the venom gland of the snake, which sits above the fang. Venom is released when the snake bites its prey. The venom drips from the fangs and enters the bloodstream of its victim. Rattlesnakes are front-fanged snakes, meaning that their venom-secreting fangs are in the front of their mouths and they fold back into their mouths when closing them. This is much different from a rear-fanged snake, which has to chew on its prey with its back fangs in order to release venom.

Front-fanged snakes are much more dangerous than rear-fanged, because they can release venom directly into the bloodstream of the victim. Their venom is generally more toxic as well.

Rattlesnake venom for most species contains hemotoxins, which cause tissue and muscle damage, internal bleeding, and extreme pain. Most creatures cannot fight off the effects of the hemotoxins because they do not produce enough antibodies. However, humans can survive rattlesnake bites as long as they seek immediate medical treatment, usually including antivenom.

Imitation is the Best Form of Flattery

Some snakes have caught on to the fact that rattlesnakes are effective predators, and have developed the rattle as a way to warn off potential predators and threats. These other snakes have begun to mimic the sound and action of the rattlesnake’s rattle! Gopher snakes are able to coil up and either allow their scales to grind against each other or vibrate their tails on the ground to recreate the rattling sound. False water cobras will coil up to look like a rattlesnake and simply shake their tails back and forth in an attempt to trick potential predators.

Here are some more commonly asked questions about rattlesnakes:

How Big Can Rattlesnakes Grow on Average? What is the Biggest Rattlesnake Ever Recorded?

How Can I Identify a Rattlesnake in the Wild?

Rattlesnakes are actually a type of pit viper, with triangular shaped heads, slender necks, and elliptical eyes with pupils that are shaped like slits. If you have a chance to look under their tail, you’ll find a single row of scales, as opposed to most snakes which have a double row of scales. And of course, they have the distinctive rattle on the end of their tail!

How Do Rattlesnakes Locate Their Prey?

Rattlesnakes have thermal receptors that allow them to detect warm-blooded creatures nearby. Like other types of snakes, they can also scent the air around them using their tongue. Finally, they can sense vibrations in the ground, and use all three of these techniques to zero in on their dinner.

Most people think that rattlesnakes can only thrive in the desert, but they are found in a variety of natural habitats, from fields to marshes to forests. Rattlesnakes are very happy in moist environments and they are strong swimmers!

Do Rattlesnakes Freeze in the Winter?

Unlike some reptiles and amphibians, rattlesnakes do not freeze in the winter, though they do go into a state of brunation. They are not very tolerant of temperatures below 65°F when active, but during brunation in dens they can stay out of the worst of winter weather.

How Can I Avoid Crossing the Path of a Rattlesnake?

Rattlesnakes, like most wild snakes, are active during the early morning in spring as well as all throughout hot summer days. They sleep at night, usually in dens or coiled beneath rocks and brush. To stay out of their way, try to stay out of underbrush and on trails. Keep your eyes and ears open, and stick together with other people so someone can go for help if needed. Wear high boots, long pants, and maybe even snake gaitors, depending on your location. Hiking during brunation season is another way to avoid snakes, as very few if any will be active between late fall-early spring.

What Are the Natural Predators of Rattlesnakes?

What would want to eat a rattlesnake? As it turns out, rattlesnakes are preyed upon by many animals, including many birds of prey (eagles, hawks, falcons), coyotes, badgers, and other snakes to include kingsnakes and indigo snakes. Some rodents such as woodrats have been known to kill rattlesnakes in self-defense if they had been attacked by the snake first. 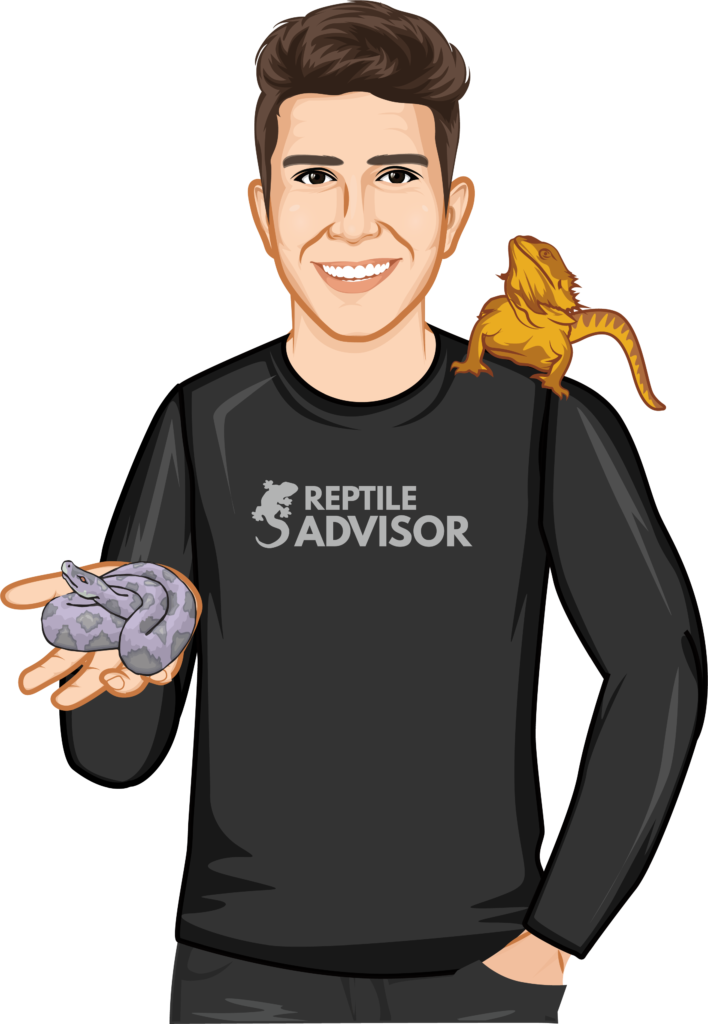