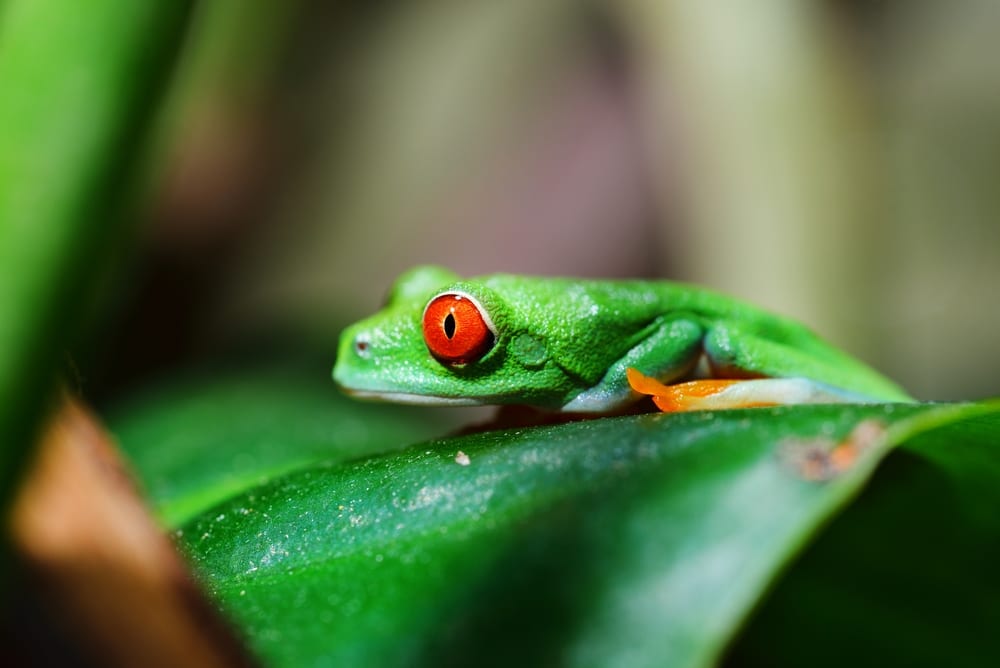 Many of us first become familiar with frogs while we’re youngsters, playing outside in the backyard or at a local park.

While many people forget the wonder and joy these animals can inspire, some of us continue to find frogs fascinating well into adulthood. You may even decide you’d like to keep some as a pet.

That’s exactly what we’ll try to help you do today, by outlining a few of the species that make the best pets.

This is important, as scientists have described well over 6,000 different species! But we’ll help narrow things down, so you know where to start.

There are a number of frog species that can make suitable pets, but the following eight types (which aren’t necessarily species – some of those discussed below actually represent an entire genus or family) are among the most rewarding.

Note that some of these are suitable for beginners, but others are best left to experienced keepers.

The White’s tree frog (Ranoidea caerulea) is one of the most popular frogs widely available in the pet trade, and they are one of the best species for new keepers to work with.

Often called dumpy frogs for their pudgy appearance, these frogs are some of the calmest and tamest frogs available to keepers. Some will even accept regular gentle interaction with their keeper or learn to accept food offered from their keeper’s fingers.

White’s tree frogs are primarily found in Australia, but they also inhabit some areas of New Guinea. They’ve also been introduced to a few portions of Florida and New Zealand. These frogs inhabit a variety of different habitats in the wild, including some which are drier than typical frog habitats are. Nevertheless, these frogs require spacious, warm and humid habitats to thrive in captivity.

White’s tree frogs will subsist on a diet of insects and other invertebrates, but large individuals do grow large enough to consume small, pre-killed rodents from time to time. They may also consume smaller frogs kept in the same enclosure, so use caution when housing them with other animals.

Green tree frogs (Dryophytes cinereus) aren’t as flamboyant as some other tree frogs, but they are a very affordable species, which is both interesting and easy to maintain. These are one of the best species for beginners to keep, as they’re not only hardy and easy to maintain, but they’re generally available for very little money.

Green tree frogs are largely green in color, although they often have white or yellow lines on their sides, and some have scattered dots along their backs. Most are also relatively small (large adults may reach about 2.5 inches in length), but despite their somewhat unspectacular coloration and diminutive size, they make excellent subjects for well-planted vivaria.

Be sure to provide your green tree frog with a spacious enclosure, which provides plenty of vertical space. You’ll also want to include plenty of branches for climbing and perching. Green tree frogs eat standard tree-frog fare, including crickets, roaches and various beetle larvae.

Do note that green tree frogs can produce surprisingly loud calls, which may fill your home during spring nights.

There are several frogs of the genus Lithobates that make good pets for beginners or experienced keepers alike. They differ in terms of size, color and natural history, but most require similar care. A few of the most noteworthy species available to hobbyists include:

Bullfrogs are the largest member of the genus, while the leopard frogs are much smaller. Green frogs, pig frogs, bronze frogs and bullfrogs are primarily clad in a single shade of brown to green, but leopard frogs bear many attractive spots and other markings.

They will all require a semi-aquatic vivarium that provides land and water sections. These frogs are typically very hardy and adapt well to captivity, but it is important to avoid housing them with smaller frogs, as they’ll waste no time consuming them.

You’ll want to feed these frogs a range of prey types, including things like crickets, roaches and beetle larvae. Many will also accept pre-killed rodents, small fish or crayfish too.

A few different horned frogs of the genus Ceratophrys make good pets, but the Argentine horned frog (C. ornata) is likely the most popular among frog enthusiasts.

Sometimes called Pac-Man frogs, horned frogs have enormous mouths and plump, rounded bodies and short, stubby limbs. They can reach pretty impressive sizes, with females occasionally exceeding 6 inches in snout-vent length (males are a bit smaller). However, most of those offered for sale are newly metamorphosized animals, who’re about the size of a quarter (give or take).

It is important to note that horned frogs are a bit bolder than many other frogs, and if threatened, they may actually attempt to bite their keeper’s fingers. They have hard projections in their mouths that are roughly analogous to teeth, so these bites can be painful.

The red-eyed tree frog (Agalychnis callidryas) is one of the most spectacular amphibians available in the pet trade, and the species is very popular among frog keepers.

These frogs have – as their name implies – bright red eyes, and they also have striking blue, yellow and orange markings on their flanks, legs and feet. However, when resting, none of these colors are visible, as the frogs maintain a tight body posture, which conceals their brightly colored areas. The colors only become apparent when the frog is startled (such as by a predator) and opens its eyes and straightens out its legs.

Red-eyed tree frogs are bred regularly in captivity, which means that you can obtain captive-bred individuals. These animals have a much better chance of thriving in captivity than wild-caught individuals, so beginning frog keepers are wise to select captive-bred frogs. In fact, you may even have success breeding this species if you start with healthy animals and provide them with high-quality care.

Red-eyed tree frogs require relatively standard tree-frog care. You’ll need to provide them with a tall, warm, humid and well-planted vivarium and feed them crickets and other small invertebrates.

Unlike many frogs who live in excessively humid environments, the waxy monkey tree frog lives in the relatively dry region of South America known as Gran Chaco. This has led the frogs to evolve the ability to produce complicated skin secretions, which serve as a defense mechanism and help to reduce the rate at which water evaporates from their skin.

Their preference for warmer, drier conditions than many other frogs also has implications for keepers. In fact, waxy monkey tree frog husbandry is quite similar to that required by many reptiles. They not only require the keeper to provide them with heat lamps and a thermal gradient, but these frogs also require full-spectrum lighting that provides UVB rays. Deprived of such, they’ll be unable to properly metabolize and use the calcium obtained from their diet.

Given their unusual husbandry requirements, this species is not ideal for first-time frog keepers. However, they can make rewarding pets for more advanced keepers, who’re willing and able to provide the type of care these frogs need.

Perhaps the most famous (or infamous) frogs in the world, several poison dart frog (family Dendrobatidae) species are available to amphibian keepers. Most poison dart frogs are clad in bright colors and high-contrast markings, which serve as a warning to would-be predators that the frogs are dangerously toxic – a strategy called aposematism.

However, while wild poison dart frogs do produce poisons, they typically cease doing so after living in captivity for a while. This is thought to occur because the toxins are derived from the alkaloid-rich insects they consume in their native range. Captive-reared crickets or fruit flies don’t possess these alkaloids, so the frogs gradually lose their toxins after consuming them for some time. However, it is still not advisable to handle poison dart frogs with your bare hands.

There are a number of poison dart frog species available to keepers, and many will thrive in mixed-species enclosures. A few of the most common species among frog enthusiasts include:

Although each species exhibits slightly different traits, most require the same basic husbandry and set up. You’ll need to provide them with a spacious, well-planted and humid enclosure, which provides plenty of visual barriers and hiding places. Because they’re small, poison dart frogs require small foods, including things like flightless fruit flies and very small crickets.

Notably, poison dart frogs are diurnal (day-active) frogs, which means they’re often easier and more enjoyable to observe than some other frog species.

Mantellas (genus Mantella) are brightly colored frogs from the island of Madagascar. They have a number of similarities to poison dart frogs, and both groups of frogs fill similar ecological niches.

Not only are mantella frogs brightly colored like their South and Central American counterparts, but they also produce toxic alkaloids in their skin. However, like poison dart frogs, mantellas also tend to stop producing these alkaloids in captivity, when deprived of their natural food sources. Nevertheless, keepers are still wise to avoid direct contact with these frogs.

There are a number of mantellas available to frog enthusiasts, but a few – such as the golden mantella (M. aurantiaca), the black-eared mantella (M. milotympanum) and Baron’s mantella (M. baroni) – are seen more commonly in the pet trade than others.

Mantellas require the same basic husbandry as poison dart frogs. You’ll need to set them up with a spacious, warm and humid terrarium, complete with plenty of plants and hiding places. Like poison dart frogs, mantellas are small frogs, who require small prey. Typically, most keepers provide their captives with flightless fruit flies, roach nymphs, termites or very small crickets.

Many frogs are relatively easy to maintain in captivity, but they can present challenges for fledgling keepers. Below, we’ll share a few tips that may help you keep your new pet healthy and thriving in your care.

While there are a variety of small animals you can keep as a terrarium-style pet, you should definitely consider frogs instead of lizards, invertebrates or some of the other common small pets available on the market. Frog-keeping can be challenging at times, but if you start with healthy animals and do all you can to learn about your pets’ biology, natural history and captive needs, you’ll have a great chance at success.