Few things are as frightening for snake keepers to hear as the phrase, “your snake has mites.”

Even beginning keepers, who may not grasp the full weight of the problem, know enough to understand that snake mites are not good. But experienced keepers will likely feel an overwhelming sense of dread upon realizing mites are running through their collection.

But don’t worry – we’ll explain everything you need to know about snake mites below. This way, you’ll be better prepared to eradicate these invertebrates, should you find yourself confronted with an infestation. We’ll also point out some of the best ways to avoid exposing your collection to these parasites in the first place.

To start, let’s examine some of the basics of snake mites and snake mite infestations.

Every snake keeper should be familiar with the basics of snake mites. We’ll go into everything in more detail later, but we’ll begin by establishing a few basic facts about these bugs:

We’ll expand upon these points and discuss a suitable plan of attack below.

Where Do Snake Mites Come From?

Snake mites are likely found everywhere in the world there are snakes. The mites will parasitize snakes as the opportunity arises, but because wild snakes are often fairly mobile, these infestations are often somewhat self-limiting. When the female mites hop off to find somewhere to lay their eggs, the snake is typically long gone before the eggs will hatch.

However, in captivity, female mites may only travel a foot or two away from the snake before laying eggs. Once these eggs hatch, your snake provides an easily accessible source of food. Over time, the infestations grow and often spread throughout all of the snakes in a given collection.

But while snake mites originate from the wild, most of those that cause problems for snake keepers likely originate from other captive snakes. Some of the most common ways snake mites may find their way into your collection include:

Additionally, it is possible (though unlikely) that you could introduce mites to your collection by introducing untreated wood to your pet’s habitat. If snake eggs were present, they’ll likely hatch and infest your snake. Similarly, it is also possible (though again, unlikely) that your snake could pick up mites from the environment, if you allow him to crawl around outdoors. This not only includes allowing your snake to hang out on the ground, but in trees too.

Are Snake Mites Harmful to Snakes?

Snake mites aren’t an acute danger in the same way that toxins, high temperatures, or predators are. But they are still capable of causing snakes significant harm.

The primary way by which mites harm snakes occurs through blood loss. Obviously, mites are tiny (they’re often described as being about the size of a fleck of pepper), so a single mite certainly can’t withdraw enough blood to cause a snake harm – it’s unlikely the snake would even notice.

However, mites rarely attack snakes individually – most infestations involve hundreds or thousands of individual bugs. When infestations are allowed to build up to such levels and remain high for a period of time, the blood loss associated with the bugs becomes significant. And as with many other health problems, young snakes or those with existing health problems are at greatest risk.

It is also possible for the tiny wounds caused by snake mites to become infected. This isn’t very common, but it remains a possibility. This is especially true of snakes kept in unkempt enclosures.

Finally, snake mites may also transmit diseases from one snake to another. This is generally not a huge problem for owners with one pet, but for keepers with large collections, it represents a serious hazard.

How Do You Get Rid of Snake Mites?

Keepers have been devising ways to get rid of snake mites for as long as they’ve been keeping snakes for pets. Accordingly, there are a variety of strategies and techniques employed, and each has its own set of benefits, risks, and drawbacks.

Some are relatively laborious and time-consuming to implement, while being extremely safe. On the other hand, some hobbyists utilize methods that may work, yet they represent significant risks.

We’ll discuss three different strategies you can employ to get rid of your snake’s mites here.

Your vet can prescribe and administer a number of medications, such as ivermectin or pyrethroids, which will kill the mites on your snake without harming your pet (if properly administered). Accordingly, this is the simplest and wisest course for beginning keepers to take.

But that’s not the only reason beginners are wise to solicit their vet’s help.

It is also important to understand that eradicating a mite infestation requires you to get rid of the mites on your snake and the mites and eggs lurking in the vicinity. And this not only means your pet’s enclosure, but the surrounding room as well. This will entail everything from disinfecting the entire snake habitat (snake eggs can remain in the tiniest of cage crevices) to vacuuming your room and cleaning or replacing anything made of wood or fabric.

In fact, your pet will likely need the medication administered multiple times, and you’ll need to clean the area more than once to achieve a completely mite-free collection. If you miss just one female mite, the entire outbreak can begin anew.

All of this means that beginning snake keepers often become overwhelmed when faced with a mite infestation. However, reptile-oriented veterinarians deal with snake mites all the time. They can usually lay out a safe and effective plan of attack, while also tailoring it to their client’s specific circumstances.

Believe it or not, water is all you need to kill a mite – they die when they get wet. This is likely part of the reason snakes often voluntarily soak in their water dishes when experiencing a mite problem.

But the problem is, mites have a waxy exoskeleton which repels water. Additionally, there are tight crevices (such as between some of their scales and around the eyes, nostrils and vent) in which mites may hide that won’t get wet when your snake soaks.

The solution, however, is simple: Add a tiny bit of regular unscented dish soap to a container of water. Don’t add a ton of soap – you’re not trying to create suds. You’re simply trying to include enough soap to break up the surface tension of the water. This will help ensure the water really wets the bugs and gets up under your snake’s scales as much as possible.

From there, you simply soak your snake as you normally would (use room-temperature water and keep the depth of the water at approximately the height of your snake’s back – don’t make him swim to keep his head above water). Also, because you’ll be soaking your snake in slightly soapy water, be sure that he is hydrated beforehand, so that he isn’t tempted to drink the water.

Bear in mind that you’ll have to clean the habitat and surrounding area as you normally would by using this technique. You’ll also have to repeat the process at least two or three times in most cases.

Provent-A-Mite is a commercial product developed specifically for the treatment of snake mites. It is widely considered safe, it has been around for years, and it is also pretty simple to use. Accordingly, it is a favorite among many experienced keepers – including the author. 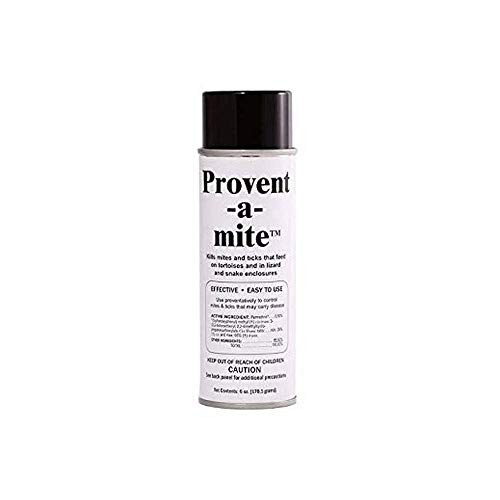 Provent-A-Mite is designed to be sprayed on the substrate of a snake’s enclosure (not the animal itself). Once there, it will kill any mite that walks across it. It provides residual protection for about 30 days, so any hatchlings that emerge after all the adults die will meet a similar fate.

It does often take a number of days for Provent-A-Mite to eliminate the mites on your snake, but overall, it generally requires much less labor from the keeper.

How Do You Avoid Snake Mites in the First Place?

As mentioned earlier, prevention is far preferable to eradication when it comes to snake mites. So, all keepers should do the things necessary to prevent snake mites out of their collections. Some of the most helpful strategies include:

The subject of snake mites sparks a number of questions among snake keepers. We’ll try to address a few of the most common ones here.

How did my snake get mites?

Snakes contract mites in a number of different ways, but they most commonly make their way into collections because their owner inadvertently introduced them to the snake. This can occur in a number of ways, including adding mite-infested substrate to the enclosure, not using strict quarantine protocols, or handling a snake with mites, then returning home and handling your snake or tending his cage.

How long does it take to get rid of mites?

Eradicating mites is often a prolonged affair. In a best-case scenario, it will probably take you at least two to three weeks to eliminate them, and in some cases, it can take months – particularly in the case of large collections.

Snake mites can reportedly feed on humans, but they won’t be able to complete their lifecycle when doing so. If you think you are suffering from snake mite bites, consult your doctor.

How do I know if my snake has mites?

The easiest way to know that your snake has mites is to see the bugs crawling on your snake or in his enclosure. Be sure to check the head (particularly the crevices near the eyes, labial pits, and the gular fold – located under the chin). You can also notice clues that may indicate a mite infestation, such as prolonged soaking in the water bowl and poor sheds.

It is possible that mites will cause enough blood loss and stress that it’ll result in the death of a snake. However, this would usually require the combination of a severe infestation and a lengthy period of time during which you didn’t do anything about the mites.

How fast can mites spread?

Mites can travel about 10 inches per minute (depending on a variety of factors). This means they’ll blow through an entire collection in the matter of a day or two. This illustrates the importance of prevention and quarantining new additions to your collection.

It’s obviously important to do what you can to prevent snake mites from infesting your collection. But, if you keep snakes long enough, you’re almost guaranteed to eventually face a mite infestation – most experienced keepers have. Just try not to panic, and begin by establishing a sensible plan of attack, which should help you wipe out the bugs and restore the health of your collection. Keep your vet in the loop while dealing with the issue and don’t be afraid to reach out to other keepers, who’ve dealt with these insidious pests before.