An important step in putting together a habitable tank for your new bearded dragon is to make sure you’ve set up a safe and comfortable substrate for your pet to live on.

Choosing a suitable bearded dragon substrate is a controversial topic among many beardie owners.

Some substrates have been deemed safe for older, more mature lizards, yet unsafe for young dragons.

Other options have been deemed too difficult to keep clean, yet some owners still take the time to engage in a rigorous cleaning schedule and consider these same substrates the best available.

In this guide, we’ve compiled a list of substrate do’s and don’ts (and other helpful tips) to ensure that you can make the right choice of what to put in your dragon’s tank.

Quick Pick: Our substrate of choice for bearded dragons is Reptile Terrarium Liner. It is absorbent, non abrasive, and shouldn’t catch your bearded dragon’s claws. Keep reading for a more in-depth look.

Here is a list of bearded dragon safe substrates that we recommend:

One of the best bearded dragon substrates on the market is Zilla Terrarium Reptile Carpet. 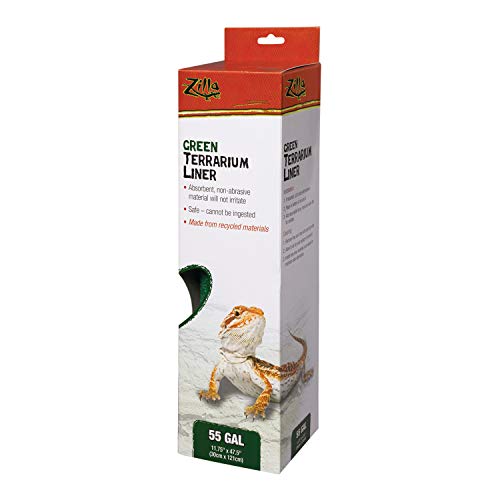 Zilla Reptile Carpet is an artificial carpet created to simulate the deserts/grass that bearded dragons might have been familiar with in the wild.

These cage liners are laid down across the bottom of the habitat to cover up the glass floor.

To clean this substrate, you can place it in a standard washing machine or spot clean as needed.

Some experts have expressed the worry that synthetic carpet can sometimes catch your bearded dragon’s claws.

This can cause your bearded dragon to eventually rip their claws off if they pull in a panic.

To spare your dragon from losing a claw, an easy way to avoid this problem would be to buy only carpets that have a tight weaving and will be less susceptible to snaring your poor dragon (such as the one we recommend above).

Newspapers make an excellent substrate for bearded dragon tanks and have proven to be quite easy to keep clean.

Some owners have claimed it isn’t as pleasing to the eye as an option like sand, but if you’re worried about problems like impaction, newspaper is a much safer option.

For any new bearded dragon owner who may not yet know: impaction is what happens when a substrate substance gets consumed by a bearded dragon (most often during mealtimes), causing a build-up inside your pet because it cannot be digested.

This condition can often lead to a blockage that may be fatal, so it’s necessary to find a substrate that holds little danger of being eaten by your pet, especially when the dragon is young.

You may sometimes find washed/shredded newspaper substrates at pet stores, which is known to be great for bearded dragons that have a habit of digging because it removes much of the dangers of impaction (though it can also retain humidity that can negatively affect your dragon’s health).

These newspaper-based options are especially attractive when it comes to keeping the tank sanitary, because when they get particularly messy a simple removal of the old newspaper is all that’s required before adding a layer of new newspaper over the tank floor.

An added bonus of choosing a newspaper-based substrate would be it’s relative cheapness in comparison to all the other options.

Large rocks and stones that might otherwise have been used for paving a walkway or other outdoor surface can be very functional in a bearded dragon tank (with an added bonus of looking pretty stylish, too).

These can easily be found in pet stores or in some garden centers.

Selecting a few stones that are large enough for your dragon to lie on can offer it a nice place to bask and rest throughout the day.

Paving stones also do a great job of retaining heat, so they’ll help keep the temperate of you tank in a suitable range.

A fairly new trend in raising bearded dragons is to put ceramic tiles down as a substrate in your terrarium.

Tiles that you might otherwise use in bathrooms or kitchen that can be found at home improvement stores will also serve well in your dragon’s tank (so long as it’s got a little texture for traction).

Tiles are also a breeze to clean and give your terrarium some extra style with virtually zero risk for impaction or ingestion.

It is recommended that you just place the tiles inside the tank without trying to seal them together, so that every individual tile can be removed (for cleaning or replacing) if needed.

An added benefit of using textured tiles in your dragon’s terrarium is that they can help file down your pet’s claws, making them a little less worrisome when you come into close contact with your dragon.

Another popular, safe option would be a non-adhesive variety of shelf liner. 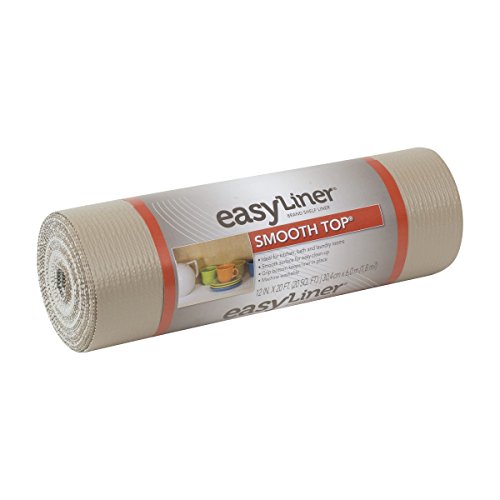 This substrate minimizes the dangers of impaction and might look a little nicer than newspaper, which may pique your interest if your tank’s appearance is important to you.

The other big advantage of using shelf liner would be how easy it is to clean, making tank maintenance fairly simple.

It should be removed and washed every now and then, as well as being spot cleaned as needed.

To clean this substrate, you can put it in a standard washing machine (but do not put it in the dryer).

Liners come in various colors and any of them are suitable for use in a bearded dragon’s tank.

Shelf liner may not sound as typical as some of the other options, but a quick search online should show you the local shops/stores where you might find some.

Like we explained above – not all substrates are suitable for bearded dragons. Here are a few that you should definitely avoid:

The big selling point that hooks many bearded dragon owners on the idea of using a sand substrate in their dragons’ tanks is the fact that, in the wild, these animals spend their entire lives running across sand and small pebbles.

This doesn’t erase the risk of gut impaction that these types of substrates can pose, however.

The small, easily ingested bits and pieces of sand can frequently follow chunks of food into your pet’s mouth and down their throat, where they may begin to form a blockage that could prove deadly.

This is most commonly a problem for younger, less experienced dragons who eat quickly and are not picky eaters, though it has also been known to affect bigger, more mature dragons, too.

Sand is one of the worst substrate choices out there and should be avoided at all costs (despite what local pet stores may tell you).

Some varieties of bark or mulch are also known as options for substrates.

These options are not highly recommended by experts because of the health risks that can accompany them.

One of the downsides to a bark or mulch substrate is how these materials tend to retain humidity, which can cause the humidity levels in your dragon’s tank to rise above the levels that experts have deemed appropriate and safe.

Impaction is also still a risk associated with these substrates, as some pieces of the bark or mulch that are small enough to ingest will likely get eaten during mealtimes and could cause an unsafe blockage.

Many pet stores offer pebble and gravel substrates, but these alternatives are hardly any safer than sand.

Their pieces aren’t usually big enough to avoid being swallowed by a bearded dragon and can lead to the same impaction problems as the previous substrates listed.

Another threat posed by these options is the damage they can do to your dragon’s teeth.

Often pebbles or gravel might get grabbed accidentally while your pet is going after an insect, but since they are so hard and unyielding, the pebbles or gravel could end up cracking a tooth or otherwise damaging your dragon’s dental health.

There are non-silica sands that many owners have opted to use as substrates that they claim provide a diminished worry of the chance of impaction.

One of the most popular types offered in several pet stores is a sand substrate made of calcium (aka: “calci-sand”), called Vita-sand.

The supposed benefit of using Vita-sand is that, being made of calcium, it will become metabolized when a bearded dragon swallows it, reducing the chance of impaction.  This does not always prove to be the case, though.

It would be fine if ingested in very small amounts over a very long period of time, but frequent ingestion with meals can reduce your dragon’s stomach acid.

That acid is necessary to break down and digest food, and without it, your dragon will encounter an even higher risk of impaction.

Calcium-based sands are also usually very dusty or powdery in their consistency and can irritate your dragon’s eyes, nose, trachea, and lungs.

Most experts argue that these alternatives are more trouble than they’re worth.

With really any particle substrate that comes in many small pieces or grains or chips, you’re going to run the risk of impaction.

Bearded dragons tend to eat whatever’s offered to them, without much regard for extra particles that might come up with it (and their digestive tracts simply were not built to pass those materials safely).

Some adult dragons may not be in as much danger of impacting their substrate, as they’ve grown stronger and perhaps more particular about what they eat.

Several experts warn against using particle substrates while your dragon is young, and we agree with their recommendation.

No matter which substrate option looks safest and most attractive to you, it is important to remember to take the proper precautions when introducing a new material into your dragon’s living environment.

After searching through several of the top sources online for all our bearded dragon information, we hope you’ve found our tips and recommendations helpful and enlightening.

For further safety questions, we recommend asking your personal veterinary caregiver to make sure you’re getting a professional opinion on how to care for your dragon and provide a safe tank for it to live in.

We wish you the best in caring for your dragon and we hope you’ll be able to use the information you’ve learned here to make an educated decision in the next steps of setting up the best bearded dragon tank possible!

Questions or concerns? Contact us at info@reptileadvisor.com and we will get back to you ASAP!